The objects we’ve seen and used thus far have all had specific types, and any given object type has a consistent definition across all objects of that type. Every DataFrame contains the same set of methods and attributes, every String object works the same way, and every File object can be used just like any other. The consistent set of functionality within an object of a given type must be defined somewhere. That’s where classes come in.

A class defines a type of object. It specifies what attributes any object of that type will have and what methods it will have. A common analogy is to think of classes like cookie cutters and objects like cookies made from them. Each cookie cutter defines the shape of a particular kind of cookie, and it can be used to make one cookie or many cookies with that shape. 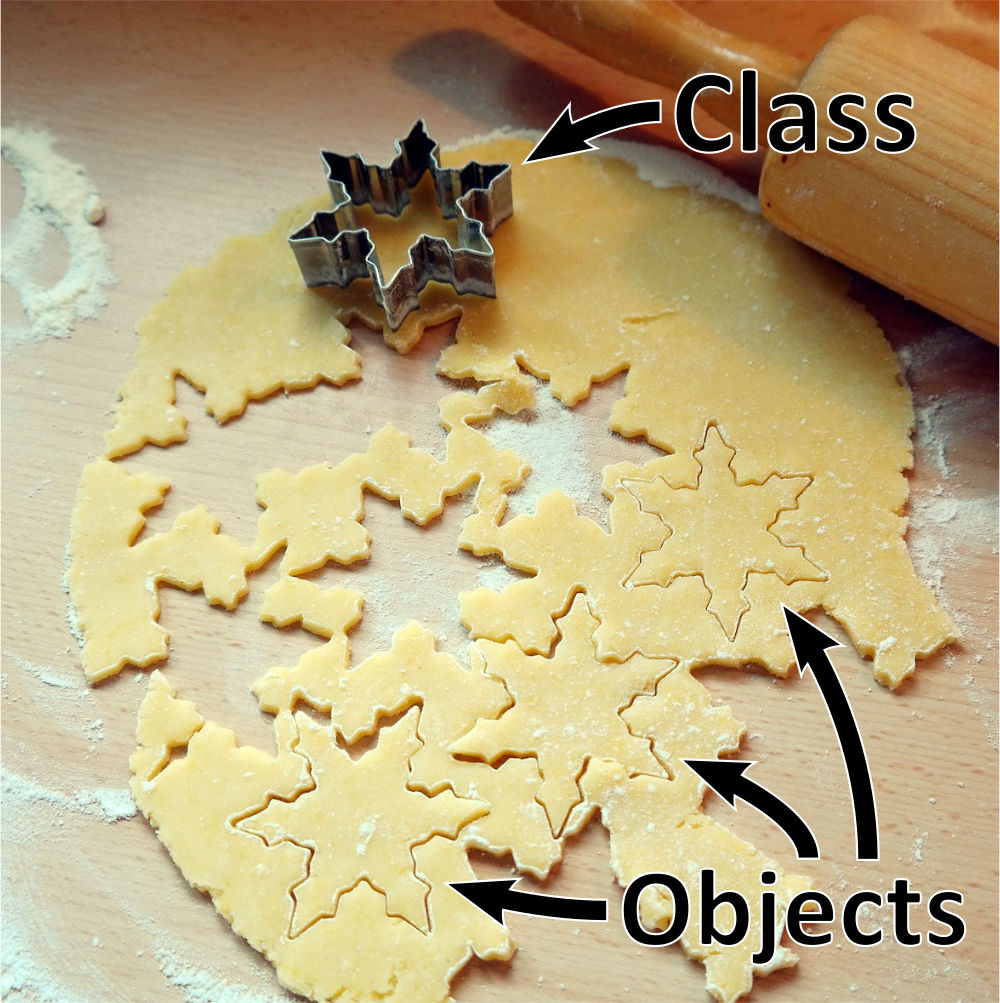 As with everything else in Python, the definition of a class must follow a particular syntax:

A class definition has the form:

The <body> can contain one or more method definitions:

A method definition is like any other function definition, but every method must have at least one parameter, and that first parameter is conventionally named self. [This isn’t an absolute rule, but it will always be followed as far as we are concerned in this book.]

Let’s look at an example. Try running the following with CodeLens. It won’t print anything out, but it will create the class.

This defines a class named Box (capitalized, as noted above) with two methods: __init__() and draw(). Notice that both method definitions are indented inside the class. This puts them inside the body of the class definition. If one were not indented, it would just be a normal function definition, no longer part of the class. (Try editing the code to remove the indentation of draw and see what changes when you re-run it.)

The above code is best explored using the CodeLens tool. Upon executing the first line, the class definition is created (you can see that it contains the two methods defined in it). The next line, a = Box(6, 4), is calling the constructor for the class, a function with the class’s name. Upon executing this line, you can see that the flow of execution jumps into the __init__() method.

When a class is instantiated in Python, the interpreter will automatically look for and call a method named __init__() in the class, if one exists. The name itself is thus special; if the method is named anything else, it will no longer be called automatically in that situation.

The goal of the __init__() method is to initialize the newly-created object’s attributes (the data stored inside the object). Attributes are created and assigned using dot notation with the self parameter.

The first parameter of a class method, typically named self, is automatically assigned a reference to the particular object in which a method is running. This gives the method access to the attributes and methods of that object.

If the first parameter of the method is not named self, it will still be automatically assigned a reference to the same object. We almost always call it self because it is descriptive of what the variable references, and the convention makes it easier to read and understand code.

Watch in CodeLens as __init__() is called. The method is defined with three parameters, self, width, and height, but it is called with just two arguments, 6 and 4. The first argument, self is automatically assigned a reference to a new Box instance, while width and height get the two arguments from the function call.

With self referring to a new Box instance, self.w and self.h are then two attributes, named w and h, of that instance. The two assignments in the __init__() method create them and give them values.

This is a common pattern for __init__() methods in classes. Often, you want to be able to give initial values to an object’s attributes when you create the object. Each attribute you want to initialize in this way can be given a parameter in the __init__() method, and then the method can create attributes and assign them values given to the constructor as arugments. For example:

When __init__() returns, you can see that the newly-created Box object, the return value of the constructor, is then assigned to the variable a.

Finally, the code calls a.draw(), and the flow of execution moves into the draw() method. Again, the first parameter, self, is assigned a reference to the object in which the method is being called. Inside the method, using dot notation with the self parameter allows it to access the object’s attributes, in this case using them to control the width and height of a printed box.

To reinforce the idea that self will always be a reference to the particular object in which a method is being called, look at the following code in CodeLens.

In the chapter on Functions, we discussed two types of functions in Fruitful Functions and Void Functions. The same distinction can be applied to a class’s methods as well. The draw() method above is a void method, because it doesn’t return a value. We can define fruitful methods that return values as well. For example:

Here, the get_area() method is a fruitful method with a return statement. When it is called, the method returns a value, which here we save in a new variable.

This can help when designing classes as well. As you design a class and define its methods, think about whether each method is something you want an object of that type to do (implies it should be a void method) or a question the rest of the program might need to ask that object (suggests a fruitful method with a return value).